Teens gain skills and confidence in the kitchen 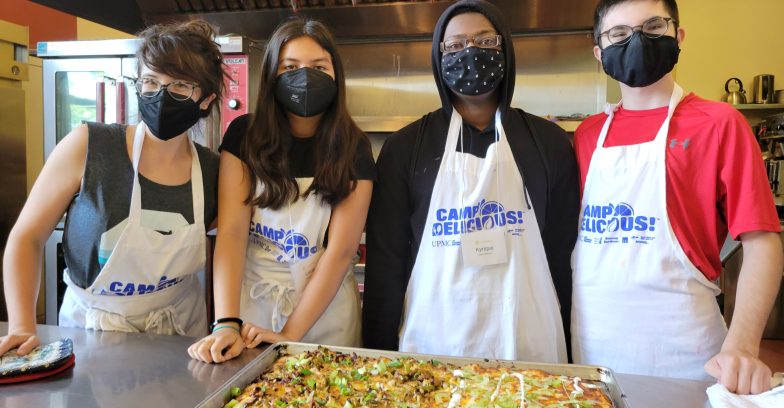 Here’s a mouth-watering popular summer camp that lives up to its name. Camp Delicious!  is all about delicious food—preparing it, serving it, learning about it, and most of all, eating it.

During the five days of camp, under the guidance of some of Pittsburgh’s most notable chefs, teens will gain the skills and confidence necessary to create meals from around the world, discover new flavors and gain independence in the kitchen. They will learn and practice the vocabulary of culinary methods, including knife skills, and hands-on techniques for working with meat, poultry, dough, and other ingredients.

Throughout the week, campers will prepare diverse recipes, participate in tastings and learn where food comes from, how it grows and ways to establish a healthy relationship with food. They will train their palates to appreciate the many distinctive flavors of herbs and spices.

By week’s end, the campers will have blossomed in their abilities to prepare and appreciate real food; they will return to their own home kitchens with the skills and knowledge to create delectable meals for their own families.

Please note:  Camp Delicious! is not designed for those who have significant dietary restrictions.

About the Director
Chef Derek Fritzel has been on the food scene for over 24 years professionally from Michelin Starred Resorts, Hotels, Private Country Clubs, Hospitals, Restaurants, Private Chef, Road Chef, Chef Instructor to Directing Food, Beverage and Accommodations for off-shore Drill Ships in the Gulf of Mexico. Well versed in the Hospitality industry, he began his studies as a Commis at the age of 13; at 18 he attended Edinboro University studying Child Psychology and earning 2 recommendations to the top schools in the nation before deciding to resign from college and attend The Culinary Institute of New Orleans. Upon Graduation his thirst for travel took him home to Pennsylvania, Atlanta, Orlando and back to New Orleans gathering acclimations from tv appearances to nationally syndicated radio shows and notable awards. He is proud to be back home and resides in Ligonier with his son, teaching the next generation of young culinarians and giving back to his community as a board member of the ACF Laurel Highlands.