Music is My Happy Place 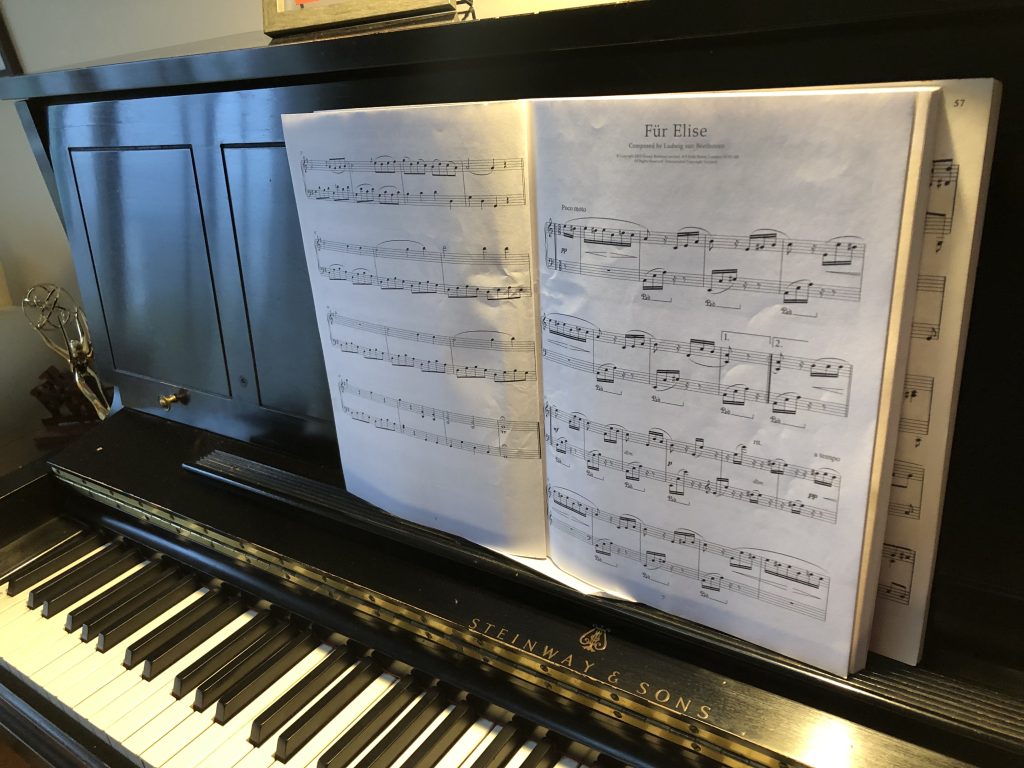 by Beth Dolinar, contributing writer
When I was growing up, mashed potatoes sounded like Beethoven’s “Fur Elise.”
Strange, I know, for food to have a sound, but those things were connected when I was young. My mother taught piano lessons most weekdays after school, with the first student arriving around the time dinner was cooking on the stove. The piano room was right there next to the kitchen, and the sounds of the piano mixed with the smells from the stove.
There’s a brain condition called synesthesia, in which one sense comes through as another. I’ve always experienced words as specific colors. I see my son’s name always in yellow and my daughter’s always in purple. Before I first learned of synesthesia—and that it’s quite rare—I thought everyone sees words in color as I do.
For me, the word music is always, always blue.
I’ve been seeing more blue lately, because I’ve been playing piano a lot. Starting at age five, I was my mother’s student; in junior high, she passed me off to another teacher. I can’t say I was ever very good, because I didn’t like to practice. And that was about the same time I started to play alto saxophone, which I preferred and which eclipsed the keyboard.
When I began my journalism career, my first big purchase was a Steinway studio upright, purchased in Ohio from a man who was trading up to a baby grand. I paid more for the piano than I did any car up to that point.
It’s followed me to at least seven homes since then. I’d neglect the piano for whole years at a time; when my children were in grade school, my mom would come to give them lessons in exchange for dinner. Neither kid really stayed with it, opting instead for sports and dance classes.
And then COVID put me back at the keyboard. The lockdown gave me more time at home and I pulled out my stack of music books and played—some of what I already knew and some new things. I could still sightread most pieces, but I lacked the artistic chops for anything to sound very good.
“You’re outta tune, kid,” my dad would say every time he visited. He would stand at the piano and play some jazzy chords. I told him it was on my list.
Years of that went by, and the needs of that Steinway got swallowed up by the hundreds of other daily tasks and expenses. I came to recognize it was out of tune, and the D below middle C was sticky—something I noticed in December while playing Christmas carols.
Sometimes life, and work, hand us what we need. In this case, it was a story I did for public television. I would feature Peter Stumpf, a piano technician who takes care of pianos both spectacular and humble. While producing the piece, I hired him to tune my piano.
It was the first tuning in almost 40 years. I appreciate that Peter didn’t shame me about that.
He spent about an hour with my upright, playing the keys as he tightened the strings. He said he liked the rich sound of my piano. After he left, I sat down to play it. I noticed the difference. I sounded better than I ever had.
These days I prefer Bach to Beethoven. But I have the sheet music for “Fur Elise,” and once in awhile I’ll give it a whirl. Even after all these years, that music still smells like dinner cooking, and it sounds like mom.
It feels like home.
***