A Work of Heart 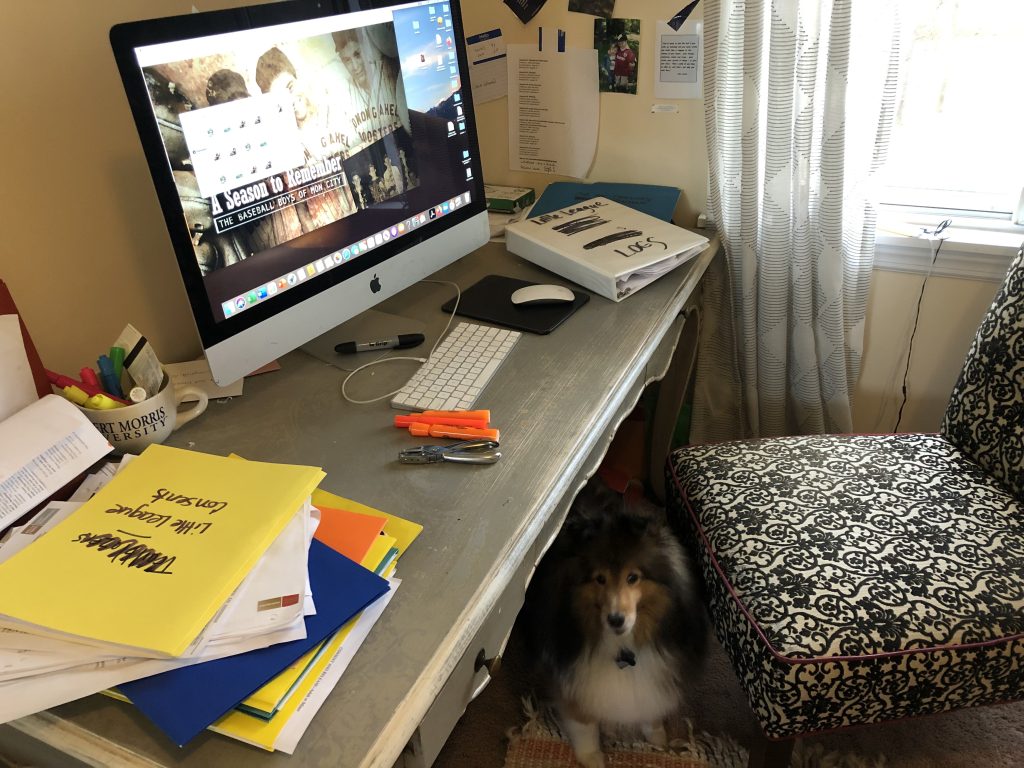 Months after retreating to my writing cave, I finally emerged. It felt like I was walking into the sunlight after a long and dark winter.

The cave is really just my office, a smallish extra bedroom that became a writing room when I replaced a dresser with a desk and set up a computer with a big monitor. When I’m at my desk, there’s a window off to my right; every so often I peek outside to see if the herd of deer are on the driveway foraging for acorns. Sometimes I get up to refill my coffee mug or to let the dog outside, and then the pup and I would return to that little room for more long hours of work.

I was producing and writing a documentary I produced for WQED, the story of the youth baseball seasons in Monongahela, Pennsylvania in the early 1950s. It’s the story of redemption and tragedy, of good winning over evil. I produce a lot of documentaries and other content for public television, but this one was special, because of how the work saved me.

In March 2021, I suffered a painful personal loss, the end of a long-term relationship. Details don’t matter now, but it was heartbreaking and hurtful and if it weren’t for friends who sat with me as I whined and wept while I tore Kleenex into shreds, I don’t know what would have become of me. I was a mess.

But friends propped me up, and then along came the next thing that would help: a big work project. I’d been assigned the baseball documentary. My first film shoot happened that May, when the crew and I went to a Little League field to meet and interview some of the players from the original teams. Now in their 80s, the men had vivid, bittersweet and often funny memories of those summers when they were little boys.

Starting then and continuing through the summer and into early fall, the crew and I traveled back and forth to Monongahela and to Williamsport, Pennsylvania, capturing everything we needed to tell the story.  When I wasn’t traveling, I was researching and transcribing interviews. As the weeks passed and our October premiere deadline approached, my little writing office started to feel smaller. My three-ring binder that held the transcripts of our more than a dozen interviews grew to hundreds of pages. Stacks of photo albums and notebooks teetered on the floor around me. The dog, feeling overwhelmed, stopped sitting in there with me.

And somewhere around August I began to feel a little less heartbroken—yes, partly because I was too busy to wallow. But the experience of the past nine months has confirmed something else I’ve always known but had never felt quite so strongly.

Work will save us. I know it saved me.

It was more than just distraction. That project came precisely at the time when I most needed it. The documentary about boys in small-town America, about a tragedy involving a hometown fan, about their teams’ eventual redemption and glory—all of it became a vessel into which I would place all my own heartache.

It’s a strange way to regard a work assignment. I’ve produced lots of documentaries during a long career, and I believe that no matter what project had come along last March, I would have poured my heart into it.

But there was something special about this one. Maybe it was the whimsical feel of long-ago summers, or getting to know the now-elderly men who so generously told us their stories. Or maybe it was just that I got to spend the summer traipsing around baseball diamonds with co-workers for whom I have so much affection and respect. Whatever, I’d go so far as to say that the documentary helped to heal my broken heart.

It was Sigmund Freud who famously said, “Love and work, work and love. That’s all there is.” When I didn’t have the one, I had the other.

Documentary producing is a creative endeavor, and it’s wonderfully collaborative. I’m lucky to have the outlet, this place in which to put my skills and my energy, but also my heart—whatever my heart situation happens to be.

The documentary aired in late October. If it’s any good, it’s because of the excellent work of my production team. But a little credit should probably go to that sad thing that happened to me last spring. I turned heartbreak into something better. Work can do that, if you put in the effort.

The morning after the premiere, I walked into my office and cleaned up the mess, tossed my dozens of scraps of notes and put the caps back on all the orange highlight markers. I put the binder of transcripts on a top shelf along with all the others, and then I peeked out the window.

The deer were there eating acorns on the driveway, oblivious to all the drama going on in that room above them.

“A Season to Remember: The Baseball Boys of Mon City” is available to watch at www.wqed.org/aseasontoremember.