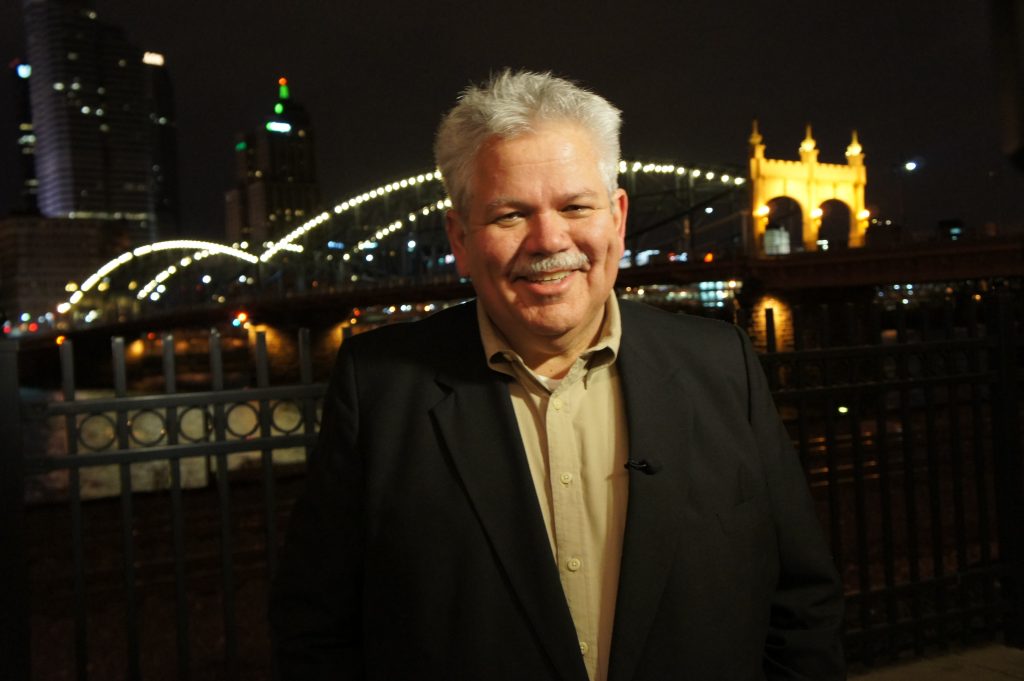 It would be difficult to think about public television in Pittsburgh—or about Kennywood, hot dogs, pies or Pittsburgh history—without picturing Rick Sebak.

For going on 30 years, Sebak has been a charming, dimple-smiled presence as he’s wandered about town, telling stories about all the things that make Pittsburgh worth calling home. His documentaries have been a fixture on WQED-TV—tasty half-hour travelogues, bites of history and musings about why we all love donuts.

Now, Sebak is ready to begin production of a new series of programs, under the banner of “Nebby: Rick Sebak’s Tales of Greater Pittsburgh.” In March, he launched a crowdfunding campaign called “Rickstarter”, which has blown past its initial goal of $113,000. The money will pay for six or seven new half-hour programs, to air starting Summer 2017.

We like the word Nebby. Do you use the word?

I like the word “nebby” a lot. But honestly I can’t remember the last time I used it naturally in conversation. I associate it with both of my parents who used it frequently as I was growing up. “Don’t be so nebby!”  I probably wasn’t aware of it as a Pittsburgh-only word till I was out of high school. I was reminded of it late last year while trolling for Christmas presents, and I saw a bowl full of Pittsburghese buttons in the gift shop at the Carnegie Museum of Art, and I bought a beautiful yellow NEBBY button. I decided then that being nebby was part of my job. I could say also that you too are pretty nebby asking me all these questions. It’s not necessarily a bad thing.

You’re a native Pittsburgher, but spent the early part of your career in other places. If you would have stayed away and not returned, do you think you would have been as prolific in your production of documentaries? Is there something about Pittsburgh that makes it especially fertile ground for the kind of programs you do?

You’re right: I grew up in Bethel Park, then went to school at UNC in Chapel Hill, got my first job in South Carolina, and worked there in public television for eleven years before I answered an ad in a trade journal and got this job at WQED. I feel lucky and grateful that I’ve been able to make so many programs, both for WQED and for PBS, and I think Pittsburgh was, is, and probably will be for a long time a wonderful place to be, to work, and to goof around. Right now I think Pittsburgh’s mix of new hip culture and older, more traditional blue collar, gritty, hard-working traditions, neighborhoods, restaurants and bars, along with our incredible history as an industrial workshop where giant fortunes were made, gives us a wonderful variety of options, sites for exploring and makes for captivating stories. The mix is the key I think.

It can be exhausting to be in the public eye all the time, but you seem to handle it better than most. How do you manage the pressure to always be charming?

I’m not always charming, but I do love being social and out and about, so I try to be friendly and open and talkative as much as possible.

If you weren’t a TV documentary producer, what career would you have?

I think if I weren’t making TV programs, I would want to be working in a restaurant. I always think of waiter or short-order cook as my fall-back position.

What do you think of the response to the Rickstarter campaign? Do you have any disappointment that your next round of programs will depend on public support through a social media campaign?

I have been humbled and amazed and delighted by the response to our Rickstarter campaign. There was a lot of work involved, trying to take advantage of all media opportunities, instigating and attending a lot of events and just trying to get the word out, keeping the word circulating and making our goal. The fact that we not only made the initial $113,000 goal, but almost $30,000 more was reassuring and invigorating and flabbergasting. Disappointment? In no way. I love that we took the risk to try a new (or relatively new) method of fundraising, and it worked. In public broadcasting, we always depend on the kindness of folks who appreciate our projects, and I’ve long known that I’m really lucky that people in and around Pittsburgh seem to really enjoy and support the kinds of programs that I like to make.

Pittsburghers love their dogs. What are the chances you would produce a “Dogs of Pittsburgh” show?

This is odd. I don’t think anyone has ever asked me that before, and I’ve never really thought about it, but I think it could be a very good and popular show. I haven’t had a dog in several years (since my old pal Clancy died) but I know their charms, their loyalty and their power. I know too how much work our graphic designer here at WQED, Paula Zetter, does with the Pittsburgh Aviation Animal Rescue Team, and I think there are many good angles that could make for a wonderful program. Shelter dogs, service dogs, trusty companions. I will put DOGS OF PITTSBURGH or maybe BARKING IN PITTSBURGH on our list of ideas. Thanks.

I do often stop and look at my own shows that are more than 6 months old. After that period of time, I’ve usually forgotten the sequence of stories, and how much information we tried to cram into every story, and the transitions from story to story that can be especially satisfying if they still slide smoothly, slyly or surprisingly from topic to topic. WQED often runs one of my documentaries on Sundays at noon, and I try to alert folks to that every week on social media.

What’s your favorite part of producing a documentary? The research, the shooting, writing, or editing?

My favorite part of the production process tends to be the part I’m working on at any given moment. I love doing the research, love conducting interviews and going on location with a crew. I love trying to figure out how best to assemble the show. I truly love working with my editor Kevin Conrad to see how individual sequences can be put together. And I love finishing a program too. I know it’s a bit of a cop-out of an answer, but I’m telling the truth. I don’t want to give up any of the steps.

Binge-watching? I’ve only done it twice that I can remember. I watched the first season of BREAKING BAD in one gulp and got hooked. And I also felt obligated to try and get up to date on DOWNTON ABBEY when it began its second season, so I watched the whole first season on one weekend. It was also very satisfying and got me to watch at least another season or two as it happened.

Name a documentary, other than your own, that you think your fans would enjoy:

I love when documentaries can be personal and informative and entertaining, blending reporting with a producer’s own history, preferences and insights. I just watched a recent FRONTLINE documentary about seafood and aquatic farming called THE FISH ON MY PLATE made by the writer Paul Greenberg who traveled the world to see how seafood is being caught and farmed while he ate nothing but fish for a year. I enjoyed it a lot. But it also reminded me at times of the wonderful local program that my colleague Minette Seate made here at WQED last year titled WHY NOT WILKINSBURG? It had the same excellent blend of personal memories and up-to-date information.  You can watch it on YouTube: https://www.youtube.com/watch?v=PJM-cEEbBYk