Taking the Fear Out of Public Speaking 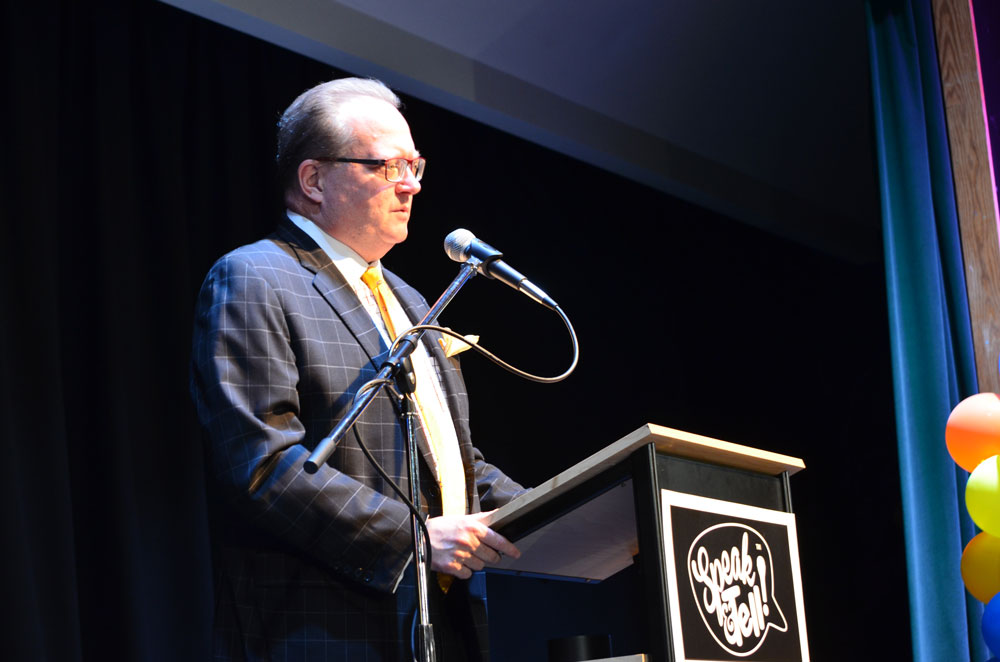 Soft music playing in the background

Michael Bartley: Thank you very much for having me and guess what? I know a lot of young people wouldn’t know that was cassette rewinding but I got it right out of the box. (Laughs) I got it – they wouldn’t know it and you know the other day we had some interns in my office and I was reading something and I picked it up and I unfolded it (laughs) very nice and I showed it to them and they looked at me like “what is this old guy talking about” and I said this is what is called a newspaper – newspaper!

Michael: They’ve never seen a print copy OK. So now you know what we’re up against here.

Larry: Things keep changing but despite changes in culture – things like being able to speak and begin able to convey a story, people are still, last I checked, acoustic and analog in the way we interact with one another.

Larry: And, Michael’s here to talk about Luminari. He’ll be leading the Speak & Tell! program which is just one of several student camps being offered this summer. I’ve known Luminari since it’s very beginning when it was created by Hilda Fu and in fact we’ve worked with her prior to that on summer camps.

Michael: She is so wonderful. And you know what the passion just filters down to all of us who have a role in Luminari and we filter it down to the campers and it all comes from the leadership and passion of Hilda Fu. There’s no question you’re right about that.

Larry: And she wouldn’t want us to be saying that but it’s true!

Michael: I know! I know but when she calls today I’m just going to pretend it’s not her and I’m not going to answer.

Larry: Not to you though – to somebody else. So tell me about Speak & Tell! and what you’ll be doing.

Michael: Well, Speak & Tell! is really – you hit the nail on the head – it’s about public speaking and you’re right no matter how we change high tech wise and digitally, it’s really just a deliverable of content and the content still had to come from human beings who find content, research content and stand up and deliver it. And you know it’s interesting – our age group is really from rising eighth graders to 12th graders and there really is a fear of public speaking that we handle directly. My co-director is Michele Wright from Channel 4 and she is just wonderful and we really collaborate on how we’re going to do it and how we deliver towards the end and what happens is Speak & Tell, which this year goes from July 6 to July 9 and we’re having it at the Lawrence Convention Center (the David L. Lawrence Convention Center) mainly because of the space. You know the larger space so we can do it safely with everything that’s going on but the kids what they do is – we first of all discover how to gather decent content and something that’s important to them because on the last day they have to stand up at a podium and deliver that to people very confidently. And we’ve always – we’ve had major success with it. We go through so many things in terms of getting rid of your fear of public speaking and a lot of people that age really have – and listen – a lot of adults have it as well. And if it something that they’re passionate about we work one-on-one with them; we work with them as a group; we bring in some great public speakers. You know last year, Larry, we had Joyce Bender came in because she’s a dear friends of mine.

Michael: Yes! And Larry I’ll tell you – you know her well. And I thought of her because you know at a young age she has epilepsy and her work is about disabilities but of course at a young age she just had a horrible fear that something was going to happen while she spoke and that’s an extreme example and she went on to tell them how she got over that fear (you know) and it really wasn’t about a fear of public speaking it was about a fear of something happening. Well if something happens like anything else in life you just stand up and you have to keep moving. We really have no choice on that kind of thing. But anyway, this whole week of Speak & Tell it’s so gratifying. We couldn’t have it last year because of the pandemic. We did it digitally, but in person it’s just so wonderful. Last year, Gina Catanzarite and I collaborated and did a digital sort of speech at the podium in terms of giving the kids challenges and how to learn what to do but public speaking is like in a lot of respects like anything else in life. You have to just walk into that buzz saw but we really give you the tools and the confidence to do that and I think what we do is we prepare these kids for speaking in their careers and their life’s challenges. And it’s not just standing up in front of an audience; it’s doing something like I’m doing right now. You have to know your content and how you deliver it is not about you voice and it’s not necessarily about how you look. It’s about having a passion for a topic and getting up and telling your story. And it’s amazing these kids have such beautiful stories and they want to do this. You know – and they’re parents can relate to the fact that they’re just nervous and scared and their palms are sweaty – well we can get through all of that. That’s why Speak & Tell is such a valuable four days, And I’ll tell you Larry when we did it at the Ellis School two years ago, I told Hilda and I told Michelle Wright and she agreed and I told Sheila Hyland when I went home that Friday after the kids delivered their speeches it was almost like I was a proud dad and the next day I emailed everybody and I said you know what – I am so sad today that it’s over (laughs).

Larry: I know that feeling (laughs).

Michael: You know that feeling

Larry: You know it’s interesting – this is Michael Barley who’s here representing Luminari this morning. It occurred to me most kids in school are asked to speak in front of their class typically with a book report or a social studies assignment or something that isn’t necessarily of their heart or of their own passion but rather they’re asked to deliver something that they had to do and they maybe where some of that fear is instilled initially because you’re worried about getting facts correct but when you speak from the heart – when you Speak and Tell about something that is either an experience you had or that you have particular knowledge about that helps remove that fear – doesn’t it?

Michael: There’s no question about that – and you know Larry when I anchored the news and when I did stuff at WQED on live television or live radio or what we’re doing right now – did I stumble? Of course I did that’s human nature that’s who we are and a lot of times kids I think because of their environment and because of this whole thing of maintain my image and early high school and those challenges we forget that they’re self conscience – they really are – we learn as adults that you just have to keep moving but you know you have a good point about the social studies aspect or the assignment. I tell these kids and I think it really helps them and we do it one-on-one, but it all depends we’re all different we know that so public speaking is an individual deal as it relates to every single person. So there’s no boiler plate here. There’s an outline but you know this very well Larry each kid has a different challenge because we’re different people.

Michael: You know what I mean.

Larry: Absolutely. There’s only one person taking you in at a time so you only need to think about that one person.

Michael: And that’s what we learned of course in television. You know when you look at that dark hole of a camera lens you’re speaking to one person. And that’s really the same the prospect with public speaking.

Larry: Well I’m excited that this is happening and it’s only one of many Luminari camps and we’re just about – we only have a minute left but Speak & Tell is being offered by or led by Michael Bartley and it’s going to happen right after July 4th. It’ll start up early in July and if you go to Luminari.org – we’ve linked to it through from our Facebook page and our website you can learn about all of the other classes; I Want to be an Ambassador is back and there’s a culinary program I think being offered once again.

Michael: Yes! Camp Delicious and that’s a fabulous one too.

Larry: Yes, they’re just wonderful classes. I hope I know we’ll see you on at least one camp. I hope some of these kids – you know – they have a standing offer to come on the air with us and share their stories.

Michael: Oh that would be so wonderful.

Larry: I hereby promise and pledge that we will make that happen.

Michael: (laughs) And I hereby commit to doing it.

Michael: Did you hear that Sheila Hyland?

Larry: (laughs) It’s good to catch up – thanks for being here.

Michael: Thank you so much!

In this 4-day camp designed for rising 8th to 12th graders, we gently guide campers through exercises that will help them conquer stage jitters, focus their message, develop a public “voice” and exude confidence in front of an audience. For more information about Speak & Tell! call us at 412-877-1888 or sign up today!